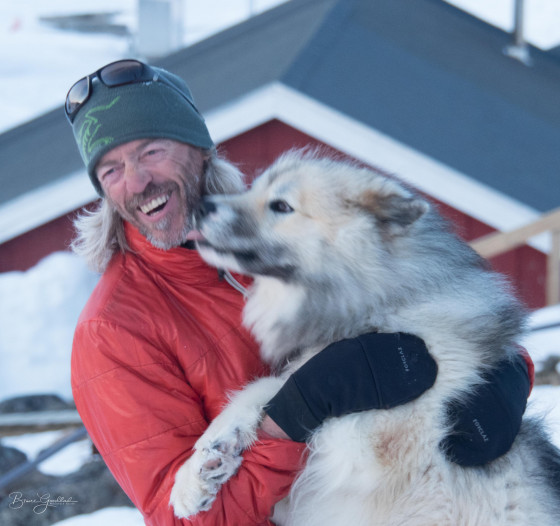 To most skiers Greenland is all about dragging sledges and camping but it doesn’t need to be like that, we recently visited the small village of Kulusuk on the east coast of Greenland for a more comfortable adventure.

If you have ever flown over Greenland heading for Canada or the US you can’t help but notice the endless climbing and skiing possibilities, on my previous 2 visits we were flown by ski plane into the Watkins mountains (the highest group of peaks in the Arctic circle). These were amazing trips with many first ascents and 2 ascents of Gunnbjornsfjeld the highest peak in the Arctic Circle. The problem with this type of trip is that is really expensive and for many skiers a bit to much suffering.

A friend of mine Matt Spencley has been exploring and guiding in East Greenland for more than 17 years and has made Kulusuk his home. Matt and his wife Helen have recently converted a house in the village to a ski lodge, they describe it as a bit like a posh alpine hut but they are underselling their achievement. They have created a comfortable base from which to go out and explore the surrounding mountains whether it be by ski or dogsled in the winter or boat, kayak or foot in the summer.

In addition to the lodge they have built a mobile hut a days ski tour away that has a heater and is stocked with food and pre placed sleeping bags so you can have a few nights wilderness skiing without carrying all the accouterments of traditional Greenlandic ski expeditions.

Our trip started in Iceland, it is almost impossible to avoid an overnight in Reykjavik in either direction. The Air Iceland flight to Kulusuk takes about 2 hours, the transition couldn’t be more marked, from bustling capital city to airport on the edge of the sea ice. 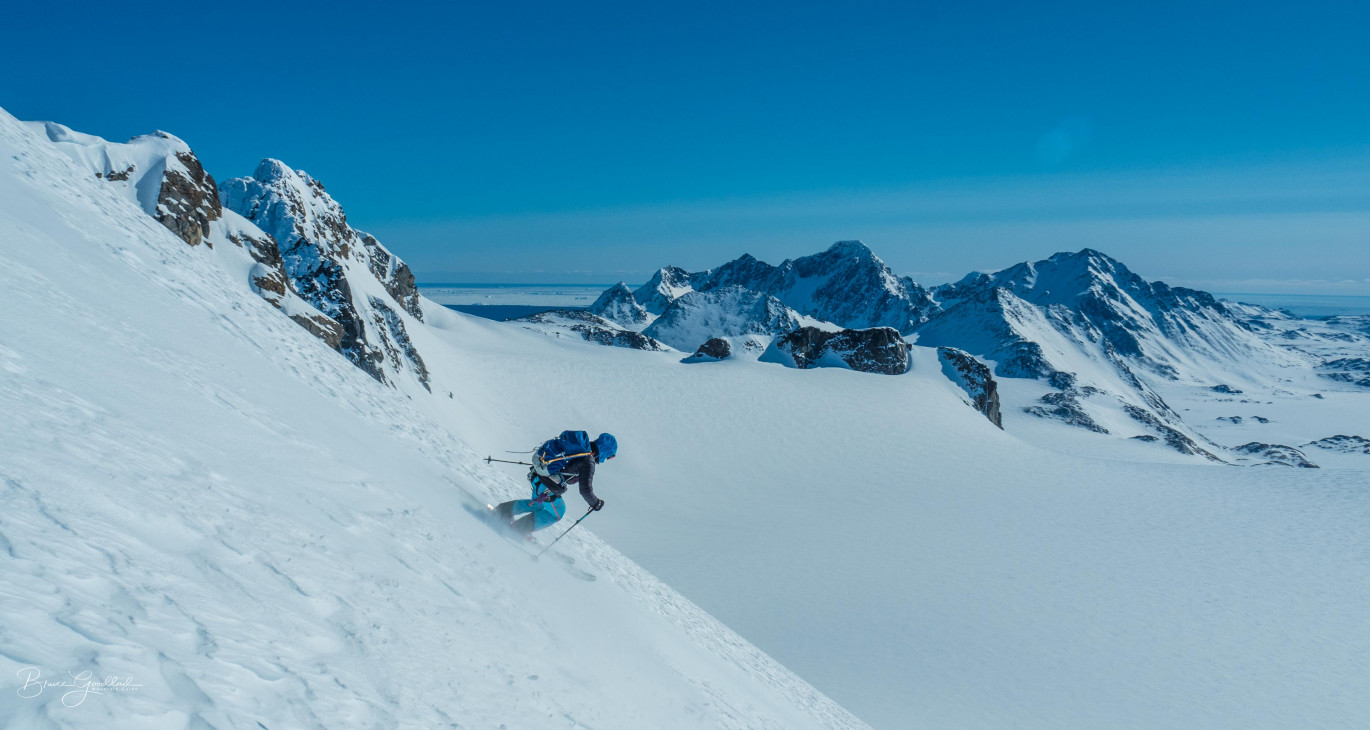 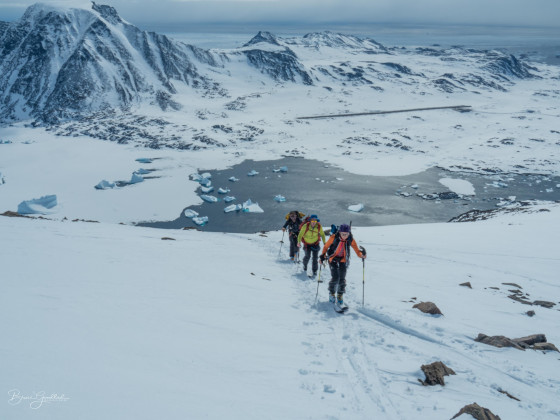 As a Brit arriving in Greenland one of the first things you notice is the number of guns (for the polar bears) and everyone has arrived at the airport by skidoo. To get from the airport to the village requires a short half hour skin (all our kit came by skidoo) to the lodge where tea and cake was waiting.

Kulusuk sits on an island which is joined by sea ice to a number of other islands, this gave us access to some amazing ski tours, Rich Manterfield one of the small team at Pirhuk (Matt and Helens business) joined us for the first half of the week suggesting tours and making sure we were comfortable with bear protocols. While we saw no sign of bear, the last one sighted in the area was within sight of the village so we had to be vigilante at all times. We made a number of ski ascents on Apusiaajik island, transport to the skiing was by being towed behind a skidoo. A bit daunting at first but then actually a really nice way to travel with amazing scenery flashing past and no need to waste effort skinning along the flat.

The mountains are not particularly high the highest peak on Apusiaajik is only 850m but when you start on the sea ice then skin up a glacier looking onto ice bergs then swap skis for crampons then climb a beautiful snow crest to an incredible summit size is irrelevant (and that was just the first day).

We were pretty lucky with the weather in 8 days skiing we had 2 wild days and we still managed to ski on those days. There are so many great options we skied wild terrain without any sign of human habitation then got back to the lodge for some amazing home baking from Theresa who looks after feeding the hungry skiers.

The highlight for most of my team was the 2 nights we spent in Quaadulu hut, the hut has been designed to be portable so the guys can pack it up and move it by boat or sled to other possible skiing areas. To reach the hut we were dropped on one side of Apusiaajik island then skied and climbed to the summit of it highest peak before descending a glacier to the sea ice we then skied along the coast for an hour to the hut. The hut has a stove, sleeping platforms and sleeping bags so we arrived with light packs. The ever presence of polar bears has to be taken seriously, if you go to the toilet you have to take a flare gun and we had a trip wire with flares set round the hut at night.

We had a great days out and back ski tour from the hut up a fantastic glacier onto and exposed summit. The next day we traversed the island over another col and back to a skidoo pick up on the ice.

Our final day was probably the highlight of my ski season, we were picked up by dog sled and taken to the bottom of Qualorujorneq which is Kulusuks home mountain. I broke trail through 800m of fantastic soft powder all the way to magical summit, we then carved turns from the summit in some pretty disappointing south facing snow before dropping onto the west face where we linked turn after turn for 500m. This was an obvious place for us to stop put skins on and put a second set of tracks next to first but this time we carried on all the way to the sea ice. We kept looking over our shoulder all the way back to the lodge admiring our tracks then sat on the terrace enjoying a beer and admiring them some more.

Not only was this a great ski trip, Matt and Helen have built a business that is fully integrated into the life of the village. Kulusuk is still a very traditional hunting community. The guys are fully integrated into the village with locals driving the skidoos taking guests out on dogsled and sharing their way of life. They have build a very special business that is immersed in the village and its people but also benefits the village bringing employment and the opportunity to share the traditional way of life with their guest.

If you want to visit Greenland I can’t think of a better way to do it. I will be back next year, you should come to.